Louis XIV grew up under the care of his mother, Spanish princess Anne turned queen regent of France, and her Italian minister Mazarin. Both of them faced the disobedience of French nobility during the times of La Fronde, prince Luis himself had to fake being asleep, as a bunch of people irrupted into his bedroom at night, arguing on whether the boy-king was well. Enfant Roi Louis, already showing his predilection for war

Imagine a 4-year-old boy at night, terrified by a bunch of adults breaking into his room without any permission or warning. These experiences marked Louis’ view of politics, he would get out of Paris’ and create his own court that he could control, where nobles were—quite literally—drawn to be his willing servants and clowns, fighting over who put the king into his pants or who handed him his apples. Half the women were his lovers, and the other half was trying to be.

His life became a political display, he created his own isolated court at Versailles, with his own rules, in order to micromanage French nobility, make them all feel and be part of his household, every minute of his life involved them. They woke up with him, watched him eat, and went to sleep with him (he had his bedroom divided into two zones, one was for the nobles watching him in bed). 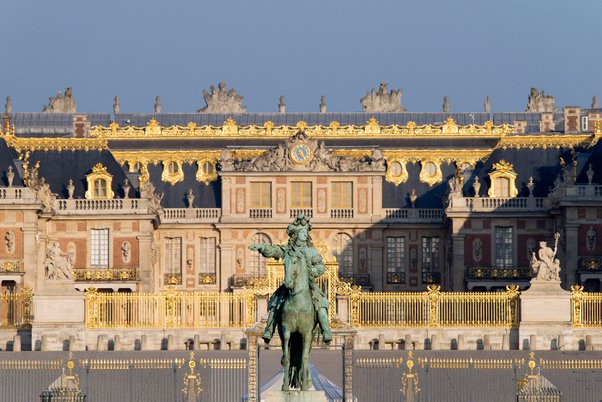 Place d’Armes, with Louis XIV overseeing the entrance to his palace 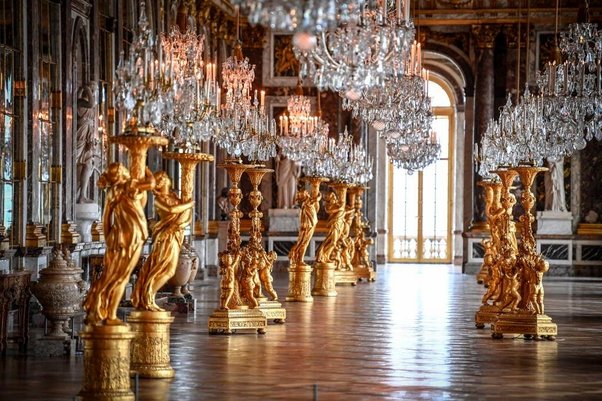 Galerie des Glaces, an expensive enlargement to the original palace that became its symbol 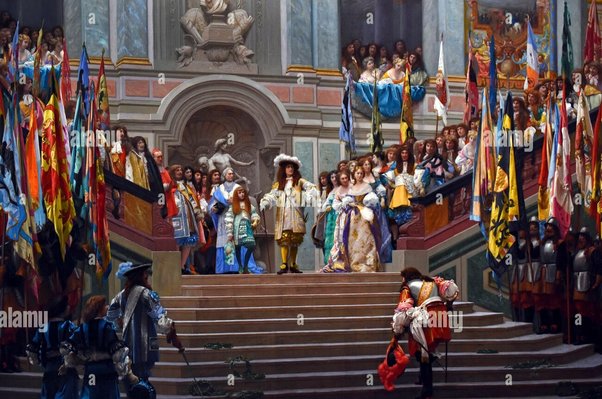 Le Roi Soleil, all the court moving around him, begging for his feedback as reward

During his reign, he based his foreign policy on antagonizing Austria and fighting wars against inbred Carlos II in Spain. He came out successful in most wars during his prime, which he used to cement his image.

The last years of Louis XIV were spent fighting the Spanish Succession War. Carlos II died heirless and he abdicated on prince Philippe, the second grandson of Louis. He did so forced by the Spanish nobility who had agreed to it with Louis, in order to avoid some partition schemes involving Austria, Bavaria, and France.

Whatever the case, the Spanish ambassador in Paris proclaimed him Felipe V at Versailles, Louis himself presented his grandson to his courtiers as the new king of Spain. The news was not accepted elsewhere, the Austrians declared war, and so did the British, Dutch and Portuguese. 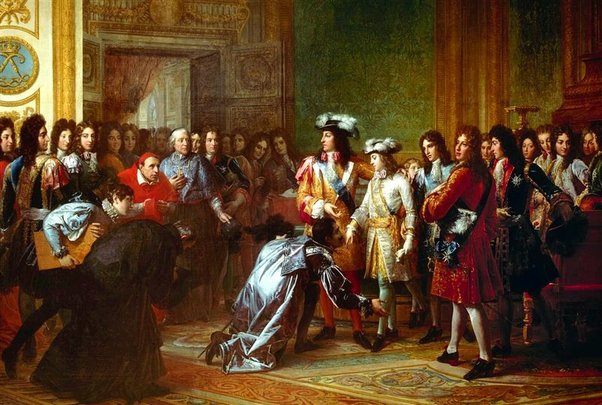 Louis XIV and Felipe V, king of France and Spain simultaneously at Versailles in 1701

France and Spain were put to the test with all of Europe against the Bourbons, and Louis saw his coffers empty and his armies losing, on top of all, his son and oldest grandson died in a stream of unfortunate events. Things got so bad that he tried to pull out of the war and recall his grandson from Spain to become the new heir to France, but Felipe V refused to leave his kingdom, and Louis was forced to stay in the war.

The rise of Karl VI as German emperor and the Jacobite threat in Britain served Louis to force peace on Britain and consequently dismember the pro-Habsburg block. But his treasury was depleted, the war “won” at a great cost (that he signed in Utrecht), his armies thinned, and his family and line were almost erased. His only consolation was having successfully seated a grandson on the Spanish throne. 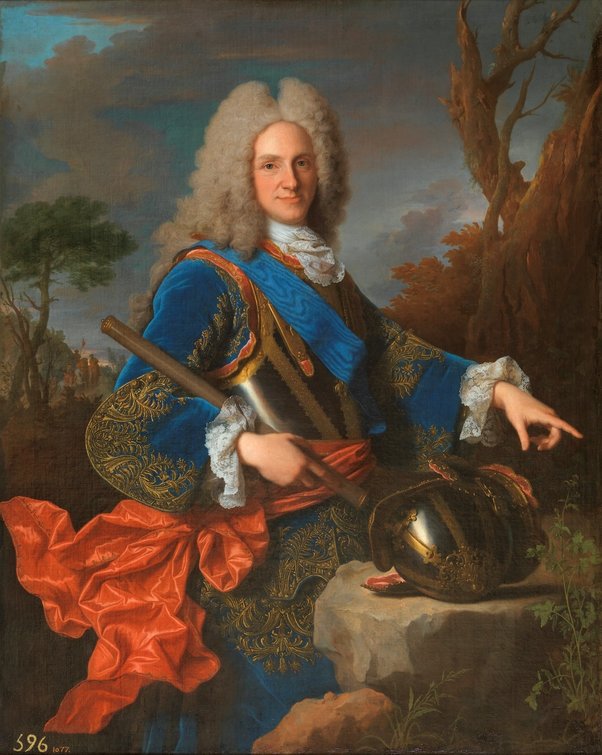 El Borbón Español, the branch of Bourbon-Anjou became known as Spanish Bourbons, with Felipe V as the patriarch

Alone, tired of Versailles and his court, with his only capable heir “wasted” in Spain, his legacy of high spending and war was crowned by the continent-wide Spanish Succession War… Louis had started to suffer from mobility problems during the war, but the year after it ended it got worse. By that time he was—and still remains—the longest-ruling monarch in world history, Elizabeth II just died second longest.

The summer of 1715 started seemingly well for Louis, but by the beginning of August, he started complaining about fever and strong pain while walking. He recluded himself in Versailles as the doctors did their typical nonsense at the time, such as bleeding him out or causing him to vomit. Over a week passed like that until his right leg started to turn black, and the doctors finally understood he had gangrene. The only thing they could do at that point was cut the leg and hope it remained uninfected after the surgery. 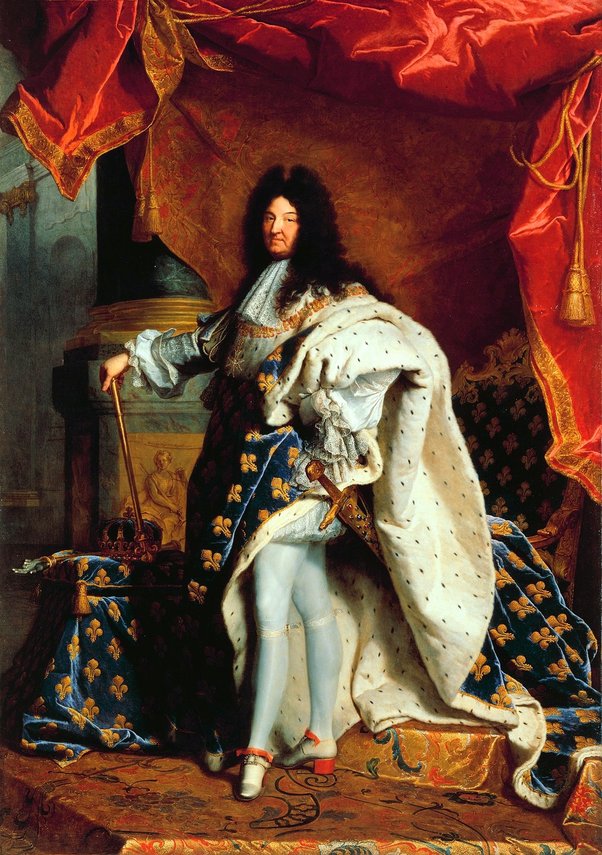 Louis was tired of everything and had no intention of enduring such torture at his age, so by mid-August they knew the king would die before the summer ended. Louis kept the spectacle that he had built in Versailles, even letting nobles into his bedroom to his death. He attended mass, bid his mistress goodbye as she left Versailles, had some private time with several of his courtiers, drank Burgundy wine… and had a talk with his great-grandson and heir Louis XV (a little boy at the time).

He finally died the early morning of the 1st of September, some minutes past 8, with sunrise in Versailles around early September at 7, it is unlikely he was conscious to see his namesake rise. His funerary events included such strange things as showing his remains to all courtiers as they passed through his bedroom the last time (as he had ordered). They took him in a large procession to the nearby town of Saint-Denis, also a suburb of Paris like Versailles, where French royals are buried. In Saint-Denis, he had a large, dark, funeral mass. 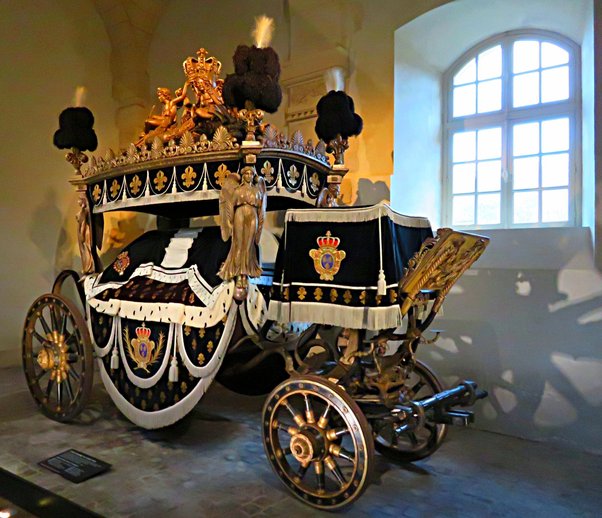 Carrosse funéraire de Louis XIV, where he was taken from Versailles south-west to Saint-Denis north, around Paris, the night of the 9th of September 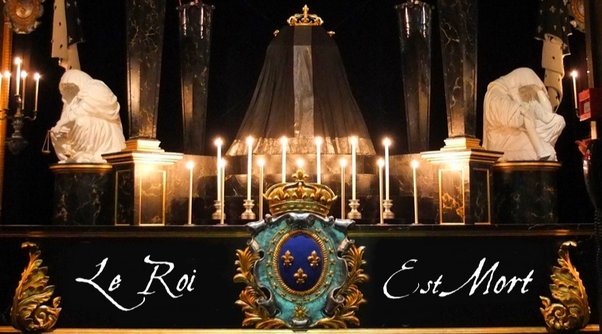 In all of France there were events naturally, but actually in Spain too, his grandson Felipe V had funerals held for Louis XIV in Madrid and the two viceregal capitals in the Americas (Mexico and Lima). We don’t have a painting of the events for Louis XIV in Lima, Madrid, or Mexico, but we do have other funerals in Lima around the time painted…

Desfile funerario de Santa Rosa, another funeral in Lima, a century earlier, but the clothes and items painted are as if it had been the time of Louis’ death

Previous article Is it true that Star Wars technology is superior than Star Trek technology? They say that hyperdrive is faster than warp drive.
Next article What are the best countries in robotics?