Search
Ask A Question
Home/ History/How did the Seljuks manage to defeat the Byzantine Empire despite being outnumbered by them in almost every battle?

The premise of this question harbors some misconceptions. First of all it incorrectly assumes that the Seljuks despite being consistently outnumbered in every battle against Byzantium (i.e. the Eastern Roman Empire) they ultimately emerged victorious in the long-term which is not the case. Mainstream literature tends to focus on strategic events such as the Battle of Manzikert (1071) generally accepted as shifting the balance of power in Anatolia and at the same time obfuscating the fact that Constantinople had put up a dogged resistance against Seljuk expansion for almost 200 years. Hence versatile myths like Manzikert which supposedly led to the beginning of the end of Byzantium tend to superimpose the whole picture which is much more intricate.

In the 1040s the first Seljuk hosts made their appearance at the eastern borders of the Eastern Roman Empire. The timing of the Seljuk incursions couldn’t have been better. The golden era of warrior-emperors like Basil II who struck fear into the hearts of Muslims had already passed giving way to a period of deep decline(1025-1081) and military neglection during which the Romans were utterly unprepared against this obscure yet powerful foe. The empire had faced many nomadic invasions in the past but this one was different. The arrival of the Seljuks at the scene led to the revival the old Persian Empire transforming it once more into a major superpower.

The Eastern Roman Empire c. 1025 C.E. As a consequence of the Roman annexation of the Armenian House of the East, the traditional buffer zone between the Christian Roman domains and the Muslim world was essentially gone. This created problems in the form of a new nomadic enemy the Seljuk Turks.

The Seljuks were a tribe from Central Asia which adopted Islam at the beginning of the 11th century. Through a series of wars they became the masters of a vast region in southwestern Asia including Iran and Mesopotamia. Already in the first decades of Seljuk rule Turkish chieftains assimilated to the Iranian military class creating a new military elite. Here it would be worthwhile to draw a boundary between the sedentary state established by the Seljuk ruling clan from the nomadic Turkmen chiefs who often operated independently of the Seljuk supreme command. As the Roman court referred to them as ‘Persians’ it becomes evident that they had clearly failed to appreciate the power dynamics of this new adversary that relied both on forward-based nomadic parties and professional central armies. Here arises the question as to what extend did the Romans underestimate the Seljuks’ military capabilities which is a matter of debate.

At first their penetration into Roman territory took the form of minor raids south of the Anti-Taurus mountains and Armenia. Soon, however the anti-military policies of Basil II’s successors, provoked large scale invasions in the Armenian Highlands with massacres and sackings comparable to those evidenced during the Early Arab Conquests in the 7th century. After the Turkic establishment in Anatolia (1073 onwards) the conflict developed into a protracted back and forth fighting in which countless towns and villages were razed.

Apparently during the early Seljuk incursions (~1040– 1050s) the Romans were seriously outnumbered in most occasions not only because of the reduction of the eastern provincial troops under Constantine IX but also due to the diversion of the professional (tagmatic) troops to deal with revolts in the West. The absence of a standing army in the East forced the Empire’s Armenian and Georgian troops to mainly resort to ambushes and static defence in lieu of pitched battles.

During the reign of Sultan Toghrul Bey (1037-1063) three major Seljuk invasions may be noted inside Armenia:

As we see from the above chronological events the Seljuks proved to be far from successfull in achieving major breakthroughs under Toghrul Bey. Despite the widespread demilitarisation of this period most of Armenia would remain in Roman hands. Experienced generals who had distinquished themselves from the epic years of Basill II were still in service and this was enough to at least temporarily halt the Seljuk tide.

Romanos IV Diogenes and the Road to Manzikert

Major Turkic breakthroughs in Anatolia were achieved later during Alp Arslan’s reign.(1063–1072) In 1060 additional anti-military policies by Constantine X allowed thousands of Roman soldiers to buy off their military service further demolishing the Armenian defences. This allowed Alp Arslan to capture major strongholds such as Ani and Kars in the 1060s providing new operational bases inside Anatolia. By 1067, the Turks had been making incursions at will into Mesopotamia, Melitene, Syria and Cappadocia, culminating with the sack of Caesarea. With the accession of the military aristocrat Romanos IV to the throne (1068) attempts were made to revive the neglected military and the whole government’s attention was focused on the war against the Turks. Initially two major campaigns were launched with a small measure of success. The continuing crisis confirmed that Romanos’ previous campaigns had not impacted the Seljuks culminating with the Manzikert campaign in 1071.

The campaigns of Romanos IV are listed as follows:

To a great extend the Roman army throughout the 1025-1081 period was an ill-equipped, ill-trained and disorganized force which lacked cohesion. In the campaigns of 1068 and 1069 the Turkic mobile forces denied any sort of direct engagement. Although the Turks were initially outnumbered at Manzikert several developments improved the Turkish chances for victory. First it was Romanos’ foolish decision of sending half of his army to Chliat instead of maintaining a solid front. Also Alp Arslan with an entire Seljuk army managed to sneak in the Lake Van region under the nose of the Romans. Lastly at the most critical moment of the battle the Roman rearguard betrayed Romanos by withdrawing.

Manzikert was not a massacre but it was a political catastrophe since the civil wars that followed encouraged the Seljuk settlement in Anatolia. The most powerful of these states was the Seljuk Sultanate of Rum (1078–1308) which emulated the sedentary Greater Seljuks. 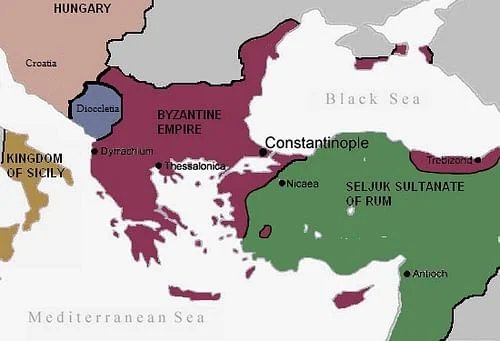 The Eastern Roman Empire c. 1090 just before the First Crusade. Turkic rule expanded in Anatolia due to nomadic migrations and Seljuk invasions. Most Roman towns were left to their own devices due to the Turks capturing the countryside. The Roman Army was nowhere to be found between 1073-1081.

In 1081 Emperor Alexios Komnenos initiated the Komnenian restoration. The quality of government and the military were improved whilst the monetary system was reformed. However it was not until the advent of the First Crusade (1097) that serious action was taken to restore Roman rule in Anatolia. 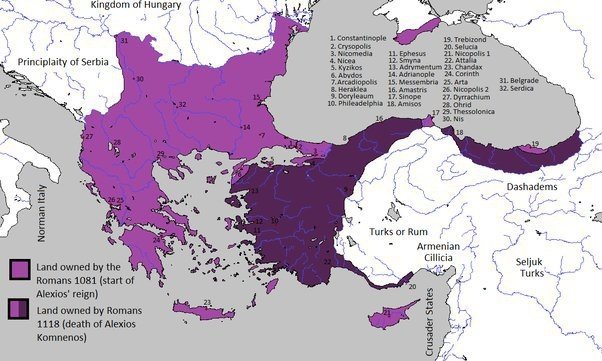 The First Crusade broke Seljuk power in western Anatolia enabling Alexios I Komnenos to recapture it whilst the Turks were forced to transfer their capital from Nicaea to Iconium.

Alexios I launched a campaign against Iconium in 1116 which resulted in the First Battle of Philomelium. The Romans employed a new battle formation the ‘parataxis’ which consisted of hollow squares of infantry with cavalry in between to stage attacks. Here Alexios’ forces withstood fierce attacks before crushing the Turks in a series of repeated clashes

In a punitive expedition against the Seljuks of Rum Emperor Manuel I Komnenos dealt Sultan Masud a crushing defeat for his violation of a treaty at the Second Battle of Philomelium in 1146.

With the absorption of the Danishmend state in the 1170s the Sultanate of Rum became a force to be reckoned with.

In 1176 Manuel I aiming to capture the Seljuk capital ordered the construction of a large number of siege engines and assembled a large army to march against Iconium. However just outside Iconium Manuel’s long army column was ambushed in a narrow hill pass known as “Myriokephalon” which resulted in the whole baggage train being destroyed. Both sides suffered heavy casualties. It was a strategic defeat because there was no more Roman reconquest in Anatolia after 1176. Myriokephalon did not significantly affect the empire’s military capabilities though for in the next year a large Seljuk force (~20000) sent to ravage the Meander valley was ambushed and completely destroyed near Hyelion and Leimocheir.

After the capture of Constantinople in 1204 by the Fourth Crusade three Greek successor states were established. One such ramp state was the Empire of Nicaea under Theodore Lascaris. Nicaea was attacked by the Seljuk sultan Kayhusrow I who supported the former Byzantine emperor Alexios III to regain his throne. The two sides met at the Battle of Antioch on the Meander in 1211. The small Nicaean force escaped the jaws of defeat only because the sultan fell reportedly from Theodore’s sword. This was the last major battle between the Seljuks and the Romans. The Sultanate of Rum became a Mongol puppet-state from 1246 whereas the Romans started to focus more on their European possesions.

The long-term result of the Roman-Seljuk wars between the 11th-13th centuries in Anatolia was an overall stalemate. Only part of Anatolia was conquered by the Seljuks, and Roman authority was maintained mainly in the western regions. On the other hand the rapid Seljuk consolidation of Central Anatolia from the early 12th century made it hard to almost impossible for the Romans to dislocate the Seljuks from their newly established settlement and recover their former lands.

Although the Roman army was victorious in many occasions, the Turks won in two strategic battles establishing their settlement after Manzikert and then securing the Anatolian plateau after Myriokephalon. In both occasions the Romans reportedly enjoyed a numerical superiority but again this is a general misconception since most of Roman troops didnt fight at Manzikert whereas in the latter event the Seljuks received reinforcements from Syria and Mesopotamia which must have raised their strength considerably. Estimates put their strength at around 20000 troops against 30000 Romans but again numbers dont really matter in this case since it was an ambush that provided many tactical advantages to the Seljuk side.

Among the reasons the Romans had seldom had the opportunity to strike a decisive victory throughout this entire conflict were the Seljuks’ nomadic warfare tactics which rarely allowed the enemy to engage them. In addition the predominantly light Seljuk cavalry wasn’t in turn designed to inflict heavy casualties against their heavier counterparts which partly explains why the Roman military capabilities were not impaired even after ‘heavy’ strategic defeats such as Manzikert (1071) and Myriokephalon (1176).

Previous article How do I fix a corrupted hard drive without formatting?
Next article How can I spoof my location with an iphone?