Search
Ask A Question
Home/ Science/What is the most likely shape of the universe?

Well, one day, a gringa made a map of the universe, in three-D, and she wasn’t the only one, it was a team, based on the discoveries, and they shaped it like a huge spiral, where this spiral line constituted millions and millions of galactic ensembles, the image I saw on TV, which at the same time educates and entertains, according to a maxim of the famous topo gigio, seemed to me, like an elegant contraction, very reasonable.

But lo and behold, there have been several models.

The planet Earth in this immensity is equivalent to a microparticle.

In other words, I imagine it, as less small than an atom, compared to the greatness of the universe, and a Swede, for example, standing on this world, is like a parasite or bacteria, or virus, that is depredated by microparticles, infinite millions of microparticles that form only one set and level, and dimension, on the scale of the universe.

My idea, not postulated by science, he clarified, so that they are not going to say, that science says otherwise.

Thus, the universe can be imagined as an immense explosion of matter, where all that material thrown by that immense explosion, are the stellar clouds full of incandescent material, and their galactic groups, making stellar pyrotechnics, where the chemical changes caused in their microparticles, they provoke organic life.

On this scale, this former explosion is immense and super fast and undergoes enormous changes, but for the microparasites, in the microparticles called planets, it is an almost infinite time, which allows the appearance of intelligent forms, which locates their existence in the surface of one of these microparticles, where the most incandescent particles of that mega explosion, allow cycles of light and shadow, on the smallest particles, which allows having the notion, consciousness, and measurement of time, and where the chemical changes that presented in these microparticles, allow the development of ecosystems and civilizations.

Microscopic civilizations on the map of the Universe.

The shape of the universe could be a huge long trail, and wide in all directions, but if it has a direction, it could be like a long band, across the void.

But if the energy and gravity of the mega galactic groups attract matter, it could be concentrated in a huge bubble, with a center, the center from which that explosion of matter starts, which could be the Big Bang, and its expulsion. of matter, the inflation of the universe. 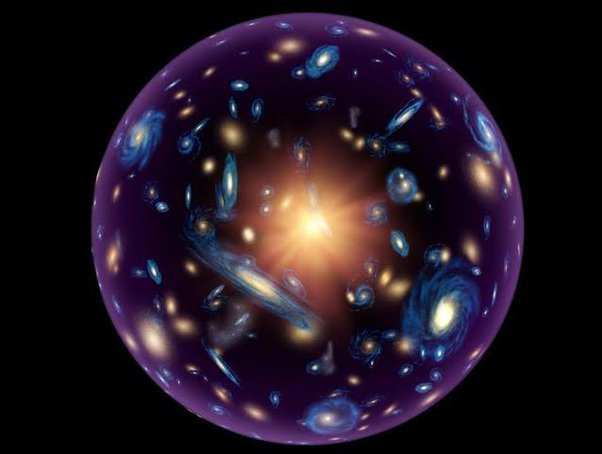 This could be an example.

But it’s a bad example, because of the Big Bang’s shape at the center like a gigantic star, ejecting galaxies. In drawing it is very bad as an example of the universe, but it was the best I found since the galaxies in the sphere would look like small points of light forming large clouds and not as this very simple design puts it. 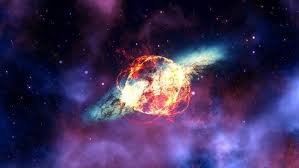 This is a newly discovered phantom galaxy, to me it’s a good example of what the shape of the universe might look like.

In the stellar vacuum, energy explodes, like a Big Bang, the explosion by the law of inertia, movement and inflation, creating a bubble that, according to the force projected by the explosion, inflates, and expands.

Now, going back to the Swedish, how big is it within that cosmic sphere?

A mathematical calculation can be made according to the calculations that are made about the extension of the Universe, but illustrating it in a simple way, each point of light in the bubble represents a cluster of millions of galaxies, hundreds of thousands, etc., a sun is like small microscopic coal thrown from that pyrotechnics, imagining, how big is a Swede on the north side of the plant?

That is, the Swedish, is less than invisible, in the sphere.

Such is the greatness of the universe.

Seen this way, with a Big Bang as the center of an explosion and not just inflation of a singularity, it is a Bubble with a center, but it is planned, that maybe there are several Big Bangs, so there would not be a single center, but there can be many bubbles, which would be a multiverse.

A multiverse can have multiple models.

For example one of the multiple physical dimensions, where everything is infinite downwards, forming the microcosm of primary particles such as atoms, electrons, photons, etc. The World would be, as metaphysics says, in the Middle, which is the bubble, or the Middle Earth, and the true macro cosmos would continue upwards, plus the alternate dimensions, such as the fourth dimension.

This Bubble model is how I agree with it.

A team from Sweden proposed a model, based on string theory, which is another Bubble Model.

Previous article Can we rule out an “animal” that lives entirely in space? Seriously. Could there be herds of space cows?
Next article What are some examples of famous pieces of furniture?