Search
Ask A Question
Home/ Technology/What’s the difference between LEDs and LCDs?

A Light Emitting Diode (LED) is a semiconductor device, like most diodes, consisting of a single PN junction. The energy level of electrons crossing the barrier between N-doped silicon and P-doped silicon drops, releasing energy as photons — light. The specific materials used in a standard diode determine the band gap — the difference in energy between the high (conduction band) and low (valance band) state of electrons in the material — and thus the wavelength and color, of this light. 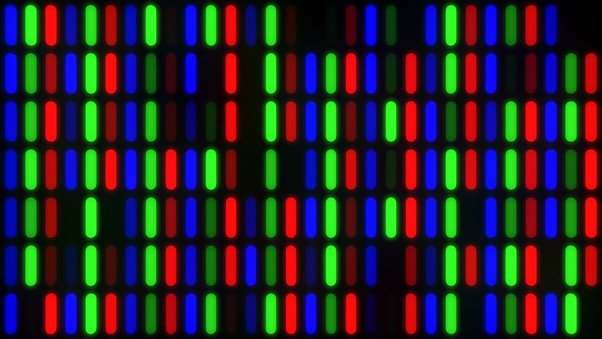 A true LED display will be composed of a large array of LEDs, with red, green, and blue triplets composing each pixel (there are other approaches, but that’s the ideal). In TV or computer displays, you’ll typically find either Organic LEDs (LEDs made from carbon-based chemistry, which is simpler to make in large displays) or micro non-organic LEDs. Of course, LEDs serve as backlights for LCD displays, as we’ll see next. 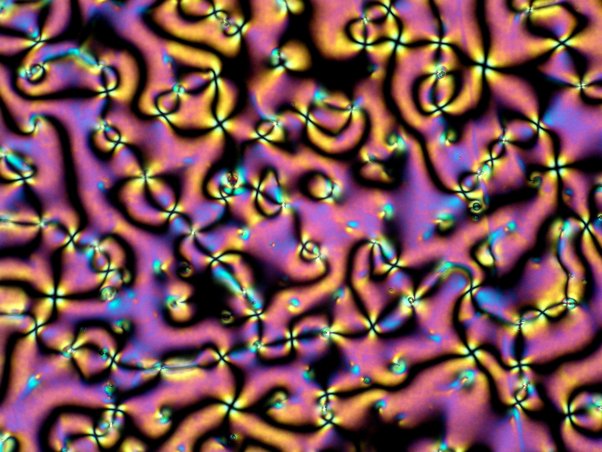 A liquid crystal is an interesting material that has the properties of both solid crystals and liquids. But most importantly for making Liquid Crystal Displays, the properties can be controlled via specific chemical formulation, temperature, and very importantly, magnetic fields. 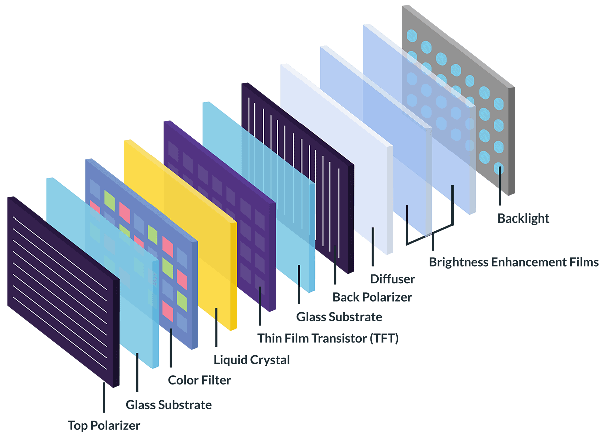 A polarizer aligns light along a single plane. This is one reason it’s used in sunglasses — it can reject scatted light, so, for example, it’s easier to see down into the water when you’re fishing. This is also a pretty handy filter for photography, able to filter out light scatter in the sky and deliver a nice, deep blue. If you happened to have your polarized sunglasses on while using your polarizing filter, you’d see a cool effect — as you rotate the filter, it goes from being clear to being opaque. When the planar alignment of two polarizers is at right angles, very little light gets through.

So the LCD display includes two polarizers, shown here at ninety-degree angles. The LCD material will, depending on the electrical control, either twist the light, making the display path transparent (well, translucent if you consider the color filters), or not twist the light, leading to a dark display. The LCD display also includes a backlight, which shines through the display. That’s how you get the image: ~24 million tiny transistors on a 4K display setting the “twist” level of 24 million tiny sections of the liquid crystal material.

In commercial products, early LCDs were generally backlit by compact fluorescent lights (CFL), often just at the edge of the display. As a result, when manufacturers started using LEDs as a light source instead, they dubbed the panels “LED” even though they were actually LCD displays with LED backlights. Over the years, using zone lighting (variable sections of LED brightness), they’ve become a bit of a hybrid, with control electronics varying both the LED and the LCD to increase the dynamic range of the display. 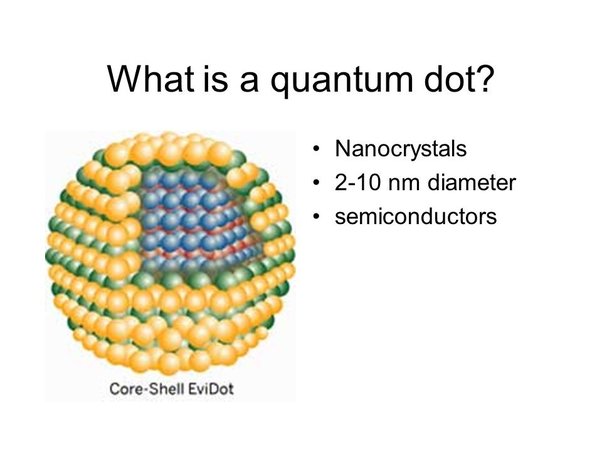 One more thing to know about displays today is quantum dot technology. This has been applied to both LED and LCD displays. A quantum dot is a tiny piece of semiconducting material. The quantum dot can be hit by photons, and it’ll emit energy in response, based on its band gap, which sounds a bit like what diodes do. But the band gap of an LED is based on the materials chosen. 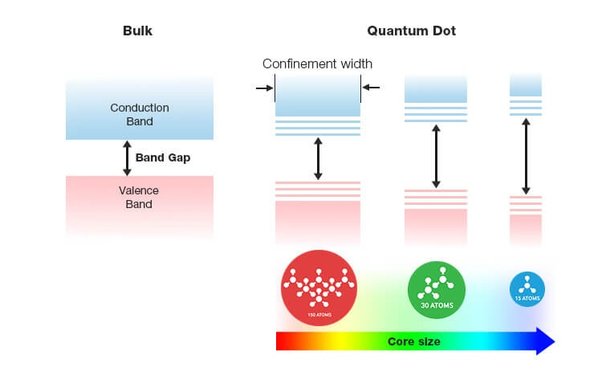 The band gap of a quantum dot is an “artificial” band gap, due to quantum confinement based on its physical geometry. That geometry can be designed as part of the manufacturing process, allowing any kind of light to be made, as long as the source light is higher energy.

A normal LCD display has a white light behind it, that CFL or LED. Here’s the thing… there’s really no such thing as a white LED. We can make LEDs that our eyes accept as white, but that just means the right mix of red, green, and blue. Some while LEDs use a blue LED coated with yellow phosphor, others use an RGB triplet of LEDs. The color quality can be limited.

To make a better backlight, a thin film containing specifically engineered quantum dots for red and green is put in front of a blue LED backlight. That yields a very wide band of white light that’s precisely controlled. Samsung calls this a QLED display — which of course means an LCD display with LED backlight using Quantum Dots. Similar things are done with OLEDs: an all-blue LED OLED panel gets individual quantum dot filters for red and green subpixels, yielding better color than the narrower band of standard OLED light. Samsung calls this a QD-OLED display, just to be clear… it can be confusing! LG’s QNED televisions are LCD/LED televisions with local dimming. Some of these are dubbed Mini-LED, which means they’re using more, smaller LEDs for local dimming, up to 30,000 in some models.

Previous article How does one not become forgotten in history?
Next article What would be a good example of the imperfections of evolution?